HomeRooted in the Civil Rights Movement: How BayLegal Became the Largest Regional Law Firm Serving the Poor in the SF Bay Area

This article is the first draft of BayLegal’s origin story: the story of our starting point, and the ways in which we remain connected to it. It is the story of how we and our sister legal services agencies began, the opposition and challenges we faced in our early years, and how that foundation has empowered us to be the client-centered regional law firm we are today. It is based on historical record, and on interviews with Ramón Arias, our founding Executive Director, and Rob Goodin, our founding board chair—both instrumental players in the creation of BayLegal. This origin story and all it has established up to the present day will be fleshed out and informed by the interviews, memories, and documents that will be uncovered and shared over the course of the year. We hope that you will join us in telling and filling out the true story of a collective mission to end poverty and social injustice, and fulfill the American dream of equal justice.

On January 8, 1964, seven weeks after the assassination of President John F. Kennedy, President Lyndon B. Johnson delivered his first State of the Union address. That address famously declared a War on Poverty — a legislative campaign against the causes of economic inequality and poverty. In his speech, President Johnson called out the inherent relationship between racial prejudice and poverty in the United States: “Unfortunately, many Americans live on the outskirts of hope—some because of their poverty, and some because of their color, and all too many because of both. Our task is to help replace their despair with opportunity.” President Johnson’s speech, and the civil rights legislation that followed, laid the foundation for BayLegal’s birth in the year 2000.

Prior to the War on Poverty legislation, no robust legal aid structure existed to advance the rights of the poor. According to Securing Justice for All: A Brief History of Civil Legal Aid Assistance in the United States, it is estimated that “during its early years, legal aid reached less than 1 percent of those in need.” 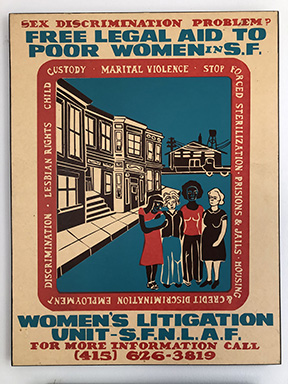 President Johnson and the OEO had been significantly influenced by Edgar and Jean Cahn and their 1964 Yale Law Journal article, “The War on Poverty: A Civilian Perspective.” The article argued for a revolutionized civil legal services model—one that consisted of law offices established within neighborhoods in need. This structure, they argued, would give voice to clients in those communities, allowing them to directly influence the entities and organizations that held so much sway over their own well-being. BayLegal and our predecessors followed this model. San Francisco Neighborhood Legal Assistance Foundation (SFNLAF), the largest of BayLegal’s predecessor agencies, consisted of six neighborhood offices in the City of San Francisco and enshrined the concept of a “neighborhood law office” in its name.  Throughout BayLegal’s growth as a regional civil legal aid law firm, the Cahns’ words have remained foundational to how we see our role and responsibility.  Today, we continue to be client-centered and committed to being embedded in our local communities with brick-and-mortar offices, over 40 mobile advocacy sites, and deep partnerships in each of our counties.

In 1974, the passage of The Legal Services Corporation Act resulted in the creation of the Legal Services Corporation (LSC): a publicly funded 501(c)(3) nonprofit corporation responsible for administering federal legal services funding.  LSC remains the single largest source of funding for legal services for the poor in the United States.  Though LSC has faced very volatile years and mixed support from subsequent administrations, including outright attacks and attempts to eliminate it in the 1980s, it remains BayLegal’s largest and most important supporter.

In 1999, LSC leadership decided that they wanted to consolidate and strengthen services by limiting the number of LSC grantees. The consolidation of grants would regionalize legal services, strengthen the voice of low-income communities and their needs and leverage limited resources. That year the Bay Area LSC recipients were informed that going forward there would be only one LSC grant covering the seven counties, rather than six separate grants and six separate non-profit corporations.  This decision presented the opportunity for local agencies to join forces and resources to serve low-income communities throughout the region.

SFNLAF (which had already absorbed the Legal Aid Society of Alameda County in 1998) merged with the Contra Costa Legal Services Foundation (CCLSF) and Community Legal Services of Santa Clara County to form Bay Area Legal Aid.  The other previous LSC recipients decided not to merge and not compete for the funding.  Though agencies such as Legal Aid Society of San Mateo County (LASSMC) and Legal Aid of Marin (LAM) did not merge, they remained, as they do today, along with other legal services nonprofits in the Bay Area, critical partners in our mission of serving all low-income people. Legal Aid of Napa Valley (LANV) merged with BayLegal in 2015.  Ramón Arias, who had been SFNLAF’s Executive Director, became the founding Executive Director of BayLegal.  Robert Goodin, who had been SFNLAF’s Board of Directors Chair, became the Chair of BayLegal’s Board of Directors and continues in that role today. LSC’s decision to consolidate was the beginning of BayLegal’s path to becoming one of LSC’s best success stories in achieving equal justice for low-income communities.

Arias reflected on what he sees as a dominant myth surrounding the merger: “Many people looking back at the history claim that LSC was forcing us to merge,” said Arias. “But LSC was simply saying, ‘We are going to give one grant. Anyone can apply for it.’ That’s the technical side of it. We didn’t have to merge. In fact, at the time, there were board members asking why SFNLAF simply [did] not apply for the entire grant.” He explained that there were numerous internal discussions at SFNLAF about whether it should merge in the first place, and about whether it should continue its work without LSC funding. Arias explained, “The reason I told the board not to forego the money and get rid of the restrictions was that, at that time, the LSC grant for the entire Bay Area amounted to about $6 million. That’s $6 million for poor people. To turn our backs on the money was to turn our backs on our clients. There began the process of 6 different organizations talking about forming a new organization.”

Arias recalled that during the process of working out the merger, he continually went back to a key talking point to put the consolidation effort into focus: “Most importantly, we hammered and hammered at every board meeting [with the different agencies] the idea that people from the different counties were not there to represent the different counties. That was old-school thinking. They needed to think beyond county borders and to think about the Bay Area as a whole. One of the reasons [SFNLAF] brought the wealth center of San Francisco to the table was we believed that the money we were getting from firms in San Francisco not only legitimately, but necessarily, had to be spent throughout the Bay Area wherever it was most needed.”

The merger officially occurred on January 1, 2000, at midnight, after nearly a year of discussion, debate, and the formation of an entirely new administrative infrastructure. “It was quite a whirlwind,” Arias reflected. “Thinking back on it, it was incredible.”

Many had been skeptical that a regional firm was a good idea, or that it could address the unique issues of local communities.  There were concerns that the well-established programs were too wedded to their own identity, culture and practice.  But, the critics underestimated that the staff and board’s commitment to the cause was greater than anything else.  As Ramón Arias reflected in his opening remarks at an all staff meeting four years after the merger (2004): “Our allegiance, however, is not so much to the institution we founded, but to the notion of achieving equal access to justice and that, my friends, is a life-long journey…what matters most is the quality of the people you work with, and what you accomplish together.”  Goodin echoed in his interview that the merger process “wasn’t painless, but it worked out. People began after working together to trust each other…. It was a process of necessity, but in the end well worth doing.”

Once the merger was complete, all involved were committed and focused on fulfilling BayLegal’s mission to provide meaningful access to the civil justice system through quality legal assistance regardless of a client’s location, language or disability. BayLegal opened offices in Marin (serving Napa from that location) and San Mateo counties and established its Central Support Office in Oakland.  BayLegal’s initial substantive priorities remained consistent with those of its predecessors: Housing; Health; Public Benefits; and Domestic Violence Prevention.  In the first four years it grew from approximately sixty to eighty staff and was gradually shifting resources to where they were most needed.  As Arias reflected, “It wasn’t just expanding resources. It expanded the way we looked at what we do.”  Simultaneously with expanding meaningful and equal access across the Bay Area, BayLegal was focused on ensuring that access resulted in impact, as Arias described: “To become the law firm we envision, to deliver effective, quality legal assistance, we must elevate our litigation, legislative advocacy, and other policy initiatives to new heights.”

BayLegal continues to judge ourselves by the standard Ramón Arias set from the beginning and reflected on four years after the merger: “Bay Area Legal Aid began as an idea, founded on a vision of equal access to justice,” he said. “However, as we will witness today, the true measure of our success lies not on our dreams and ambitions, but rather on what we actually do for our clients and whether we make a difference in their lives. That’s our client’s bottom line and it is ours as well.”