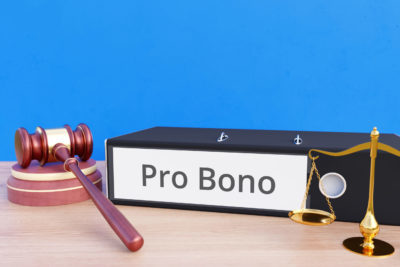 The 1980s marked a tumultuous period for civil legal aid, given the Reagan Administration’s antipathy toward legal services programs and the resultant policies intended to curtail the work of legal aid agencies across the nation. Indeed, the historical literature describes the Reagan era as “a tremendous roller coaster ride” and a “struggle for survival” for civil legal programs facing significant reductions in funding, further restrictions on whom they could serve, and limitations on the scope of legal advocacy they could provide. Buried in that story of survival is the story of a cultural shift toward partnership between private attorneys and poverty law attorneys, who had long been considered strange bedfellows.

According to Alan Houseman’s seminal historical record of the history of civil legal aid, Securing Equal Justice for All: A Brief History of Civil Legal Assistance in the United States, appointees to the Legal Services Corporation (LSC—the federal funding body for civil legal aid in the US) in the early 1980s implemented a mandate that “significantly increased the involvement of individualized private attorneys and the organized bar in the governance and delivery of legal services,” which the legal services community viewed as an infringement on its independence and resources. That directive is known as the Private Attorney Involvement (PAI) mandate.

However, the mandate united these two ostensibly disparate forces in ways that positively impacted low-income communities and the legal services community at large—a productive partnership that continues to this day. According to Houseman, the mandate helped private attorneys participating on boards or with legal services to “appreciate the difficulties of serving poor clients with severely limited resources, enabled them to view legal services attorneys as respected peers within the legal community, and strengthened the role of the organized bar as a champion of federally funded legal services.”

Ken Theisen, an advocate who has been with BayLegal and its predecessor, the San Francisco Neighborhood Legal Assistance Foundation (SFNLAF) for 39 years, was an early witness to the LSC mandate for PAI.  As PAI coordinator for 20 years, Ken found ways to involve private attorneys in our work without compromising our programs and needs of our clients. On January 15, 2020, he offered the following reflection on the early years of the federal requirement, when he was working at SFNLAF prior to its merger into BayLegal in the year 2000.

Ken Theisen: In the ’80s, LSC mandated we use the equivalent of 10% of our LSC grant for the involvement of private attorneys in legal services. Its definition of that was very broad. Most legal services organizations interpreted that as taking money away from them and giving it to the private bar. Our initial attitude was [that] we want[ed] to keep that money internally. So we had to think about how we could spend the money within regulations without laying off staff. That’s how we came up with the clinic concept. We created the Cooperative Restraining Order Clinic [which is now its own nonprofit and continues as a vital resource for domestic violence survivors in San Francisco]. When [SFNLAF merged to form BayLegal] we had a housing clinic and a restraining order clinic in two to three counties…. Between having to do legal services and pro bono stuff, the clinics created a hybrid of the two…. We used private attorneys in a creative way so we could work together, and enhance our work. The key components [of the pro bono program] are that a lot of attorneys want to volunteer, and we need it—we can’t do this work all by ourselves.

In 2005, Genevieve Richardson became BayLegal’s first Director of Pro Bono Activities (she is now Executive Director). That role was created to elevate pro bono regionally, and to centralize and equalize pro bono involvement across the Bay Area counties. On January 29, 2020, Genevieve provided the following reflections on her work to conscientiously bring pro bono volunteers into BayLegal’s mission and services.

How have you understood beginning of LSC’s PAI requirement?

Genevieve Richardson:  I have always understood the LSC PAI requirement as basically a Reagan-era attempt to privatize legal aid—the idea being if you require legal aid to involve private attorneys in the work then volunteers will just take it over and you won’t need to actually fund poverty lawyers to do it. I think the beauty of that story is that, though we had always used pro bono, had always engaged with the private bar, [PAI] did increase and the private bar in turn increasingly recognized the importance of having expert poverty lawyers. It encouraged them to fight for continued funding for legal aid. And as we saw last year, there was a historic number of law firm and corporate signatories in support of LSC. I don’t know if there’s a direct correlation, but it’s clear to me that those who engage in pro bono understand that we need expert poverty lawyers on the ground. The idea that you can just take it over through volunteers is just not there as much.

What was it like creating the regional pro bono program?

Genevieve: It was an exciting opportunity and I had a lot of fun. It was a time of increasing law firm, and then corporate, engagement and we were able to build pro bono programs together.  I made friends in the early days that remain very good friends and important allies in our work today.  We were able to build relationships with over 40 law firms, including the largest immigration pro bono program in the Bay Area focusing on U Visa and VAWA relief, connecting over 100 immigrant survivors of domestic violence and sexual assault with pro bono attorneys in one year. It was also different than I initially expected.  When I became the Director of Pro Bono Activities I naively thought we were going to massively expand resources and serve a lot more clients. While there is incredible value to pro bono partnerships and with the right projects it can be very impactful; the importance and efficiency of experts handling cases should never be underestimated. I also grew to understand that an important part of pro bono is also the opportunity for everybody to have the experience of helping, participating, and knowing what the issues are and what our clients face – to understand how unjust the system can be, how easy it is to get entrenched in poverty and how legal advocacy can change the trajectory.

The reality is if people are willing to do it, there is a way to get involved and to help and we have to break down the myths that prevent people from getting involved.

What are some of the most rewarding aspects of pro bono partnerships?

Genevieve:  There are so many rewarding aspects.  As the Director, one of the best aspects of the job was to read and develop the initial case file for the client we were trying to place with a pro bono attorney, find a pro bono attorney, build a relationship with the attorney along the way by answering their questions, and then to hear tremendous gratitude from both the client and the attorney at the end.  Likewise, many of our larger impact cases simply would not have been possible without partnering with pro bono counsel – those cases have resulted in changing hundreds of thousands of lives. It is just incredible.  And of course sometimes all we had to do was tell the client they had an attorney and suddenly the case went away (landlord was no longer harassing the client, etc.). Those are a win too.

What have been your favorite pro bono success stories?

Genevieve: Many of the pro bono stories that stick with me are of the families divided by immigration status, the randomness of who was born on which side of the border, who we were able to help. For BayLegal, because our immigration practice focuses on helping survivors of interpersonal violence, these cases always start with incredibly heartbreaking stories of violence and abuse; but, they end with a family empowered with employment authorization and relieved of the fear of being separated from loved ones. In many of the cases pro bono attorneys also helped to reunite parents with children who had been left behind when the parents came to the U.S. in hopes of providing them a better life. It is a powerful turnaround of something really bad to something beautiful – loved ones together supporting each other.

What is your vision for pro bono involvement over the next 20 years of BayLegal’s life?

Genevieve: I see it as only growing and being more creative both in our direct client services and supporting BayLegal’s operations. Our recent Name and Gender Marker Clinics have been an exciting and important new client service in recent years.  Just last Sunday, PayPal’s legal counsel joined us for our 5th Name and Gender Marker legal clinic in San Jose.  In only four hours, volunteers helped 15 participants change their names and gender markers on their legal documents, so that their identifying documents match their gender identities—a service that one participant described as “life-altering.”  Ben Adams, Vice President of PayPal’s legal counsel, told us, “volunteering at BayLegal’s Name and Gender Marker clinics is personally the most rewarding pro bono event I have experienced.” I am really proud of this work and these partnerships.

I believe that pro bono can also continue to help us figure out how we can increase and expand the delivery of legal services by participating and sharing ideas and resources that they use to connect services across vast distances. BayLegal’s mission is to provide equal access to justice no matter where you live in the Bay Area, but we still have tremendous barriers and resource gaps.  Pro bono partners can help cut through some of those divides, for example, by using technology to connect a lawyer from San Francisco to the outer parts of some of our counties, like Contra Costa or Santa Clara or Napa. I’d also like to see us work more with our sister agencies throughout the state to help address the resources barriers of the urban center and more rural areas.

BayLegal is fortunate to have our pro bono partnerships carried forward by Andrea Del-Pan, Pro Bono Director, and Mary Jaeckel, Pro Bono Manager. Our future will be only stronger with their leadership.

This story represents only one part of the broad network of pro bono partnerships that BayLegal has formed over the years, and which we will continue to highlight over the course of this year. Watch this space.