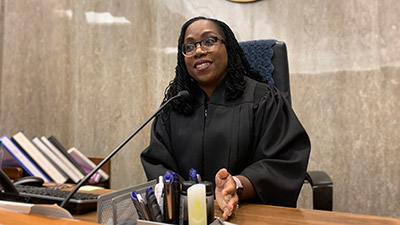 Last week the White House announced that President Joe Biden has selected Judge Ketanji Brown Jackson, currently serving on the U.S. Court of Appeals for the District of Columbia, as his nominee for the United States Supreme Court seat being vacated by the retirement of Justice Stephen Breyer. If confirmed, Judge Jackson will become the nation’s first Black woman Supreme Court Justice.

We join the overwhelming majority of our colleagues in the legal sector in applauding Judge Jackson’s impressive credentials and experience. Her service on the federal bench has been distinguished and extensive, including more than 500 opinions during her eight years on the appellate court. We also remark with pleasure on Judge Jackson’s past service as a Federal Public Defender, which would mark a departure from the typical imbalance both on the federal bench and in Supreme Court nominations toward candidates whose legal background before serving on the bench consists of private practice and/or prosecutorial roles.  If confirmed, Judge Brown would be the first former Public Defender to serve on the country’s highest Court.

We also join our colleagues and our communities in celebrating the likely ascent of a Black woman to the nation’s highest court for the first time, even as we note how overdue this news is, and how much work remains to be done on the way to equal justice and equal participation in justice systems for Black women. Throughout U.S. history and continuing in the present, Black women have been the targets of harmful legal arguments, deliberations, and decisions while simultaneously being excluded from assuming positions as attorneys, judges, or jury members who influence decisions. For us perhaps the most important aspect of Judge Jackson’s nomination is that it points directly to the work ahead, and asks us to deepen our commitment, as a firm and as legal practitioners, to supporting, celebrating, and multiplying Black women’s leadership in law.

Congratulations to Judge Jackson for her historic nomination! May it help to mark the way forward in the long struggle for justice for and by Black women.